Archive for the tag “prom”

Recently, when I’ve told people what my kids are doing – and even what I’m doing for the summer — some have made a comment like, “Oh, so you’re going to be an empty-nester.”

I’ve never thought of it that way. That’s what you call old people in 55+ Senior Living Communities who play a lot of golf and tend to their gardens. At least, that’s the image “empty nest” conjures.

But I’m in the midst of a milestone week of activities that serve as markers letting me know that “empty nest” status, while not fully realized, is progressing toward inevitability unless we suffer a “failure to launch.”

The thought of it makes me wistful for my own relative youth as a newer parent and for the times when my kids (seemingly) needed me more. Maybe they’ll still need me — or better yet, want me — as an integral part of their lives through their process of leaving the nest. I’m confident we’ve done our best as parents and the kids are ready to move on as they should with their lives as we adapt to new roles and arrangements. 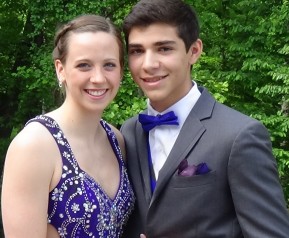 May 25. He looked great, a handsome young man in his tuxedo with the purple vest, bow tie and kerchief to match his date’s dress.

I’m proud of Daniel. He assumed a heavy academic load in high school, taking many Advanced Placement and Honors classes, and earning college credits through AP exams and several community college courses. He certainly took on more academic challenges than I ever did, which is perhaps also a sign of the increased pressures placed on kids today and more intense competition, and handled them with confidence and a cool resolve. He was admitted to the university of his choice, and received some scholarship money, for which I am both proud and grateful.

He also became more engaged socially. I could see his growth and development, and more of his personality emerging as he matured from a freshman to a senior. He joined about 30

classmates for a pre-prom party (and parents’ photo-shoot marathon). It was a joy to see him interacting with so many friends and acquaintances.

He also recently got his first job at a restaurant, taking on adult responsibilities and earning his keep, another sign of the bird discovering its wings to escape the nest.

And of course, there’s Senior Week at Ocean City, MD in early June, the rite of passage. There will be debauchery, but I’m not worried about Daniel. He has a good head, thinks independently and makes his own decisions. I just told him to “be smart.” His step-grandma was sterner and put it another way: “Don’t be stupid!”

My daughter Rebecca has been spreading her wings for a while, most recently all over Europe while on a college junior year study semester abroad in Lyon, France. She’ll return at the end of May, and surely will be busy reconnecting with friends, looking for work and arranging senior year.

I’ll be teaching tennis this summer in Bethany Beach, DE, as part of my career transition to counseling, while on break from classes and internships. The kids will be bouncing this summer from their mom and step-mom, and traveling with friends. I’ll come home to visit, and hopefully they can visit me at the beach.

So we’ll be scattered and all pursuing our own more independent lives this summer. I’m anticipating the idea of an “empty nest” may start sinking in.