Archive for the tag “the Ruggler”

A Hat Over the Wall

I threw my hat over the wall today.

It’s a saying I remember, and sometimes use with people who have no idea what I’m talking about, from the Landmark Education Forum, the three-day program designed to bring about life-improving “breakthroughs,” which borrowed the phrase from President John Kennedy, who talked about throwing the hat in reference to America’s determination to explore outer space, and who appropriated the expression from Irish author Frank O’Connor, who wrote the parable about two adventurous boys who were halted in their journey by an imposing stone wall – until one threw his hat over the top, compelling them both to scale the barrier to retrieve it.

I didn’t join NASA; I won’t be exploring Mars or spending a year in space. I did register to do (I say “do” rather than “compete in” purposely) the Columbia Triathlon, two hours before registration closed and 15 days before race day after debating whether to commit for a few months. I threw my hat over the triathlon wall.

As the original rap artists Sugar Hill Gang sang in “Rappers Delight”: “I don’t mean to brag. I don’t mean to boast (But we like hot butter on a breakfast toast).” But I guess this is a little about boasting. Anyone who tells others he is doing a triathlon is boasting, prima facie.

I am not an avid triathlete. Not like those eccentrics you see with the really tight onesies with the front zipper, the Terminator-style Ray-Bans, the spokes-less, flyaway bikes, the nutrition diaries, the hairless legs (OK for women), the oddly ubiquitous black wetsuits, the de rigueur upmarket bike racks, the fanny belts, the clacking  bike shoes, the 8 percent body fat and taut-as-power-cables leg muscles, and the neatly arranged race day gear and supplies, enough to suffice for a week’s vacation.

I am an amateur. I train the minimum. I’m not a member of any triathlon club or training group. I flaunt the convention. My ego requires me to do that. If I had all the proper equipment and clothing – if I looked like a triathlete — how could I explain finishing in the bottom 15 percent?

I’m positive I have the oldest and slowest bike of all the competitors…errr…participants: a 12-speed Fuji touring bike I bought in 1984. 1984! I can’t give it up, even if it would increase my speed by 20 percent and save my legs. It’s part of my carefully crafted image of the anti-triathlete triathlete. My bike pedals have no clips; just old-school straps. I don’t lock in with bike shoes. That’s unheard of in triathloning. Someone recently recommended I get the clips and the shoes. Solid advice, but I’m not going to – would ruin the image.

I’ll likely be one of the few not wearing a wetsuit. Again, bad for the image. I’m going to freeze my ass off at the beginning of the swim.

I train alone and modestly, mostly during lunch breaks at work when I swim or jog. I recently hooked up with another multi-sport event participant for a few bike rides, the one who advised about the bike clips. Whenever I told him to ride at his own natural pace during our rides, he blew me away and had to wait for me at the nearest stop sign. He also told me about the weekly “bricks” the Mid-Maryland Triathlon Club sponsors – bike rides followed by runs. I love the term. I’m going to put in one or two “bricks” before the event, by myself, just so I can say that I “bricked.”

Since I first started doing triathlons, I’ve averaged – hmmm, let’s see – two per decade. (You thought I’d say something crazy, like 10 per year, right?). I did two in the 1980s, and three in the 1990s. I may have never done one again, except I broke my leg in a soccer game in 2012. It was a long and arduous rehab and recovery. I started on the road back by swimming. Then I added cycling. For motivation, I threw my hat over the wall and entered the 2013 Columbia Triathlon. Running was the hardest. I added that last and slogged through a bare minimum of training jogs. One year and 22 days after surgery for a broken tibia and fibula – and nearly 15 years since my last triathlon — I completed the Columbia Triathlon, a .93-mile lake swim, 25-mile bike and 6.2-mile run, in 3 hours, 37 minutes. I was proud of that. I had to disappear into the woods for a few minutes to shed some tears over the struggle of the previous year. I was amazingly consistent, too (i.e., consistently slow for a triathlete), finishing in the 85-90 percentile for each leg.

It was a spiritual experience. That’s all it is to me now, more than an athletic event. Time? I don’t care about time. I’m not chasing anything, not trying to qualify for anything, not seeking a PR (personal record) or age group award. I entered again for the spiritual experience. I want to find a rhythm in the swim and enjoy the feel of warming up in a cold, open body of water. I’ll revel in the feeling of speed and the sights and smells of the countryside on the bike. I’ll embrace the challenge of the hilly run and find inspiration in the struggle.

I may even break out the Ruggler during the run. That’s the Runner-Juggler (the “Joggler” was already taken). Now that may be showing off, but it has a real purpose – refocusing my mind from the pain, monotony and seemingly interminable length of the run to the three airborne balls.

The triathlon is the thrill of being alive, the delight of being able to do it at all. I’m excited I get to go retrieve my hat. 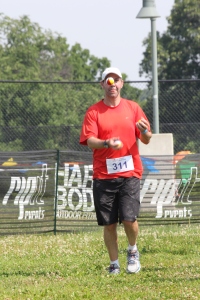